skip to main | skip to sidebar

You can call the search off.

I haven't had a vodka and tonic for - ooh, about 12 years. Or a gin and tonic. Or anything and tonic. Ever since 'they' thought it was a good idea (why!) to put aspartame and saccharin into even regular tonic. I am one of those unfortunates for whom these additives don't taste sweet, they just taste chemical, and vilely so. Oh, feel my pain.
Over the years, the search for a drinkable tonic moved from diligent to desultory to dead. I never lost the habit of scanning ingredients lists of bottles which just happened to be there but habit it was, and at best provided me with an opportunity to go off on one. Again. Nothing I like better* than a bit of tssking. I might occasionally have treated myself to a slow, sad head-shake.
Until late last year, there dawned a day. Did you notice it? The one with the eclipse? And the comets, and the rains of blood, and every time you cut open a pigeon its entrails spilled out to form the word 'Ouch'? Not just once or twice, but every time? That was the day I discovered Waitrose Own Tonic, which is Free From Artificial Sweeteners. Look, it says so on the label. O frabjous day, callooh, callay!

So another hunt was on. Which vodka! It's been so long since I bought any, all I knew was not to buy anything that was advertised because it was crap. That still leaves a whole supermarket shelf's worth of labels I had never seen before.

Until my eye fell on this. Organic Vodka. See? Every so often, this sorry race of ours does something just because it's right. 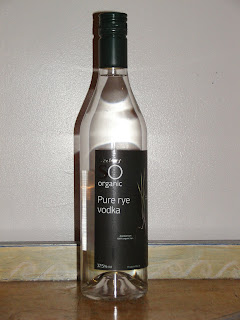 *Soo-oooo-oo not true, but on reflection now is neither the time nor the place.
Posted by Mangonel at 1:54 am

But how does it taste?

I want a vodka tonic, now, and we have lovely vodkas in the house. But I've got a cold, so I will confine myself to staring longingly at the limoncello.

American tonics don't appear to have those vile substances in them — now that's weird.

Ah, sorry. I was toying with leaving my car with you, but now you've admitted your drink addiction, I'm afraid you've blown your chances.

what's wrong with vodka and tomato juice? or vanilla vodka and mint and demerara sugar and mint and lime and some more mint and something else which I forget now?

Vodka comes straight from the devil. Move over to gin - organic or otherwise - as quick as you can. Mind you, vodka is rather conflated in my mind with drinking as fast as possible and foreheads on tables. Perhaps with tonic it's all right.

helloooo
there must be a wobble in the space time continuum because here I am when there I wasn't - it's such a shame that I have nothing intelligible to say but then it's my birthday tomorrow (true) and I really don't feel as old as I'm going to be - it simply cannot be true, if it were I'd be a grown up! Pass the vodka quick.

Valerie, what the heck is limoncello? It sounds delicious. And how come if you have tonic you haven't tried a vodka and?

DAVE! I'm OUTRAGED! Did those twelve years of abstinence count for naught? It's just not fair!

ILTV - my shopping list grows apace. I will let you know. If I can still see to type by then.

Mangonel
Dealer in disease, destruction and death with a kick like a mule. And a BIG crush on Stephen Mangan. Which Significant Other knows nothing about.

Things to do before I die